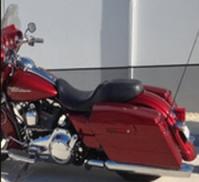 Serving the Antelope Valley for 28 years.

Antelope Valley Harley-Davidson was established in December 1985. We opened in a 3,500 sq. ft. building on Sierra Hwy. and after about 7 years realized it was way too small. We then thought that doubling our size on 23rd St. West to approximately 7,500 sq. ft. would last us well into the future. That also only lasted about 7 years. That puts us here where we are today in a 25,000 sq. ft. the facility that we moved into in 2000.

We are located in the California High Desert, about 70 miles from downtown LA, in Northern Los Angeles County, near Edwards Air Force Base.

We are the gateway to many great riding destinations, Death Valley National Park, Grand Canyon, Yosemite National Park, Sequoia National Park, and Mammoth just to name a few. We are also in the middle of many of the most popular loop routes out of the LA area that include Southern California Beaches and Mountains. We have Motorcycle rentals available year round, and there is a shuttle service (www.antelopeexpress.com) that runs from Lax to our parking lot, which also conveniently has two hotels in it.